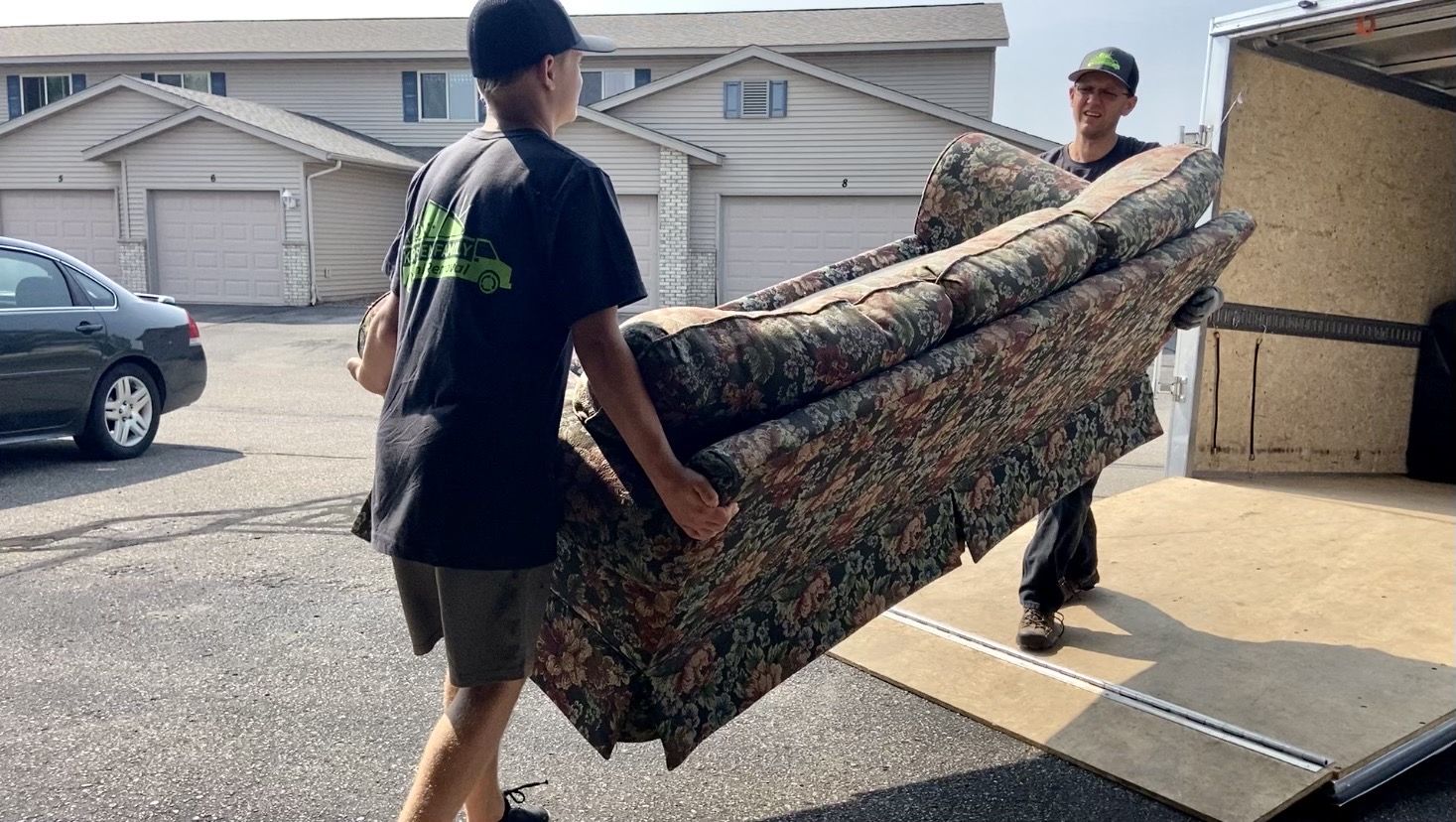 Because we’re a junk removal company, people frequently ask us how to “do it yourself” for various types of junk removal. And one of the most common questions has to do with how to get rid of a couch.

The easiest answer is that if your couch has value to somebody, put it up on Craigslist or Facebook. Whether it’s free or for a reasonable price, just say that the buyer will need to bring a vehicle and help loading. Your couch will become the buyer’s problem, and you’re done.

If you wind up needing to get rid of it yourself though, you have two choices to make.

The first question has to do with how the couch is going to actually make its way out the door of your home. The two options are to haul it yourself, or to have somebody haul it for you.

If you’re going to haul it yourself, you’ll need to prepare the couch and make a path to the door. If the couch is particularly large, like a sectional, see if it disassembles into multiple pieces. That’ll make it much easier to move.

Also, if there are any mechanisms (recliners, etc.) you may want to tie a piece of rope around the couch to hold those shut. There’s nothing quite like hauling a couch and having a reclining section just pop out while you’re moving it!

For moving large couches that don’t break down into smaller sections, lifting straps will not only make the job much easier, but they’ll help make sure the couch doesn’t get damaged by twisting and angular force.

If you’re going to get somebody else to haul it for you, contact those people and arrange a time. This could be some college buddies, or a professional junk removal company like us. Obviously your college buddies will probably work for some beer and pizza, but our charge for disposing of a couch is only $75 in the Eau Claire or Chippewa Falls area – $25 extra if you live in Menomonie.

Now you have to consider what you’re going to do with it once you haul the couch out the door.

If you’ve called us to move the couch, this step is handled for you. We’ll donate or dispose of the couch as appropriate. Plus, you don’t have to actually haul it out of the house – we do that for you.

If you’re doing it yourself, you can either throw it away – in which case it goes to the curb for trash day, or you can bring it to the dump – or it goes to a donation center / thrift store.

If you’re leaving it out for the garbage company, make sure you give them a call and let them know you’ll have a couch for them. They sometimes send a different crew and/or a different truck for large item pick-ups, and you don’t want to have your couch removal thwarted by a garbage company that’s not ready to take it!

If you’re hauling it to a donation center, you’ll need to arrange transportation. Couches typically require a box van or a pickup truck to move properly, so if you don’t have one of those check with your friends & family to see if they might be able to loan you one for an afternoon.

When you’re loading the couch into an open-top vehicle like a pickup truck, also make sure to ensure that any removable cushions are either firmly secured (you wouldn’t be the first one to put the cushions in first, then set the couch on top of them!), or are moved in the enclosed part of the vehicle.

Then just drive your couch off to the donation center!

If doing it yourself sounds like a big hassle, that’s what we’re here for.

We love helping people learn how to do things themselves, but if you don’t have the strong back or the large vehicle that junk removal typically entails, we have both – and we’ll come to you. We can make your couch disappear, without you having to lift a finger.

Of course we also haul refrigerators, beds, televisions, and tons of other stuff. If it’s laying around your house and you’d prefer it not be, that’s the kind of problem we love to solve. Just give us a call for a fast, free estimate!