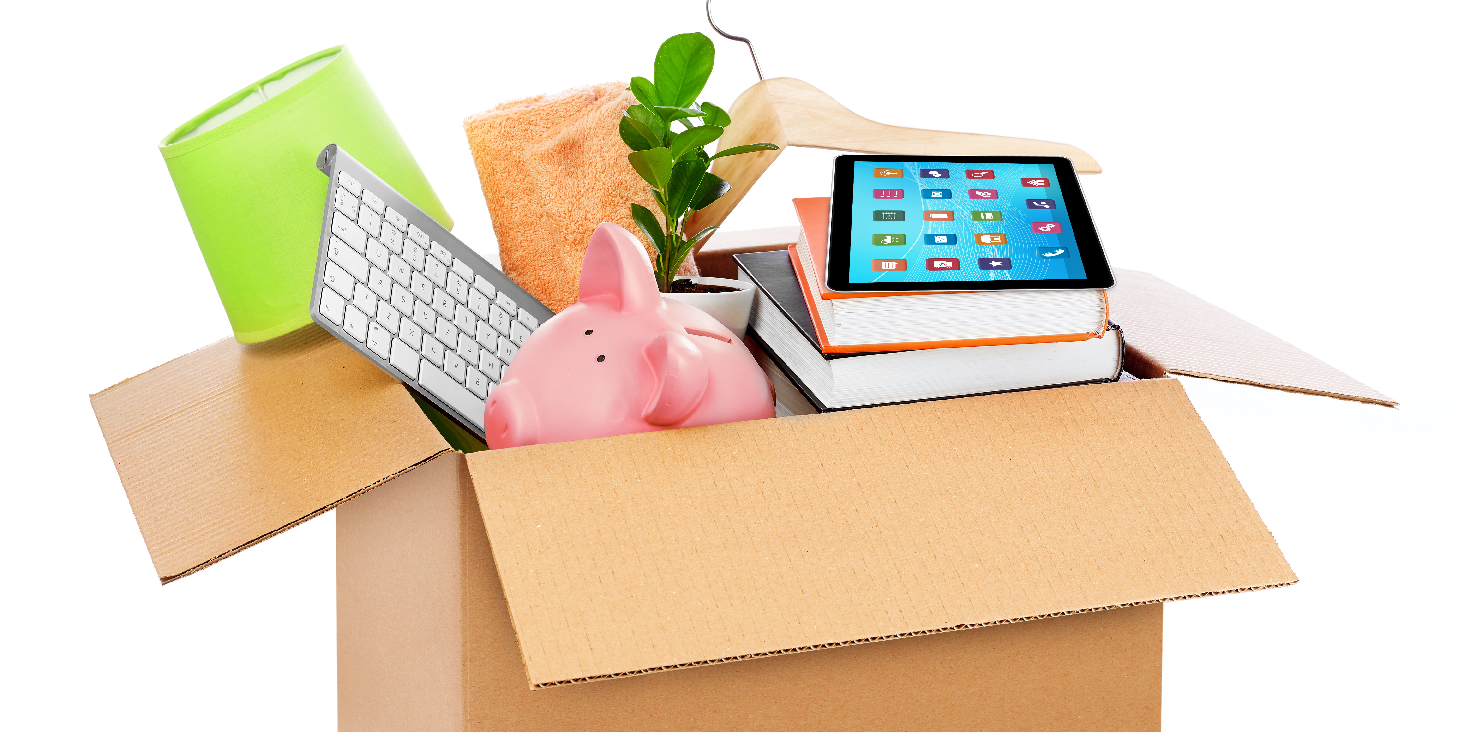 Occasionally a new term for an old problem will crop up, and that’s what we’re learning about today – “doom boxes”.

The term “doom box” was coined a year or so ago, and it’s claimed that “doom” is an acronym for “Didn’t Organize, Only Moved”.

Typically when we box things up it’s because the items go together in some way, but doom boxes break that mold. Basically, a doom box is a box full of stuff that’s all in the box because it didn’t belong where it was. It’s not organized, it’s not sorted, it might not even be stuff you want to keep – it was just a convenient way of clearing a space.

And honestly, it’s not a bad quick-fix strategy. If you just need all the stuff off a counter now, so you can do something you need to do like cook dinner, you might not have time to organize, sort, and deal with the stuff that’s currently there. So into a box it goes, to be dealt with later.

In fact, certain personality types – ADHD personalities in particular – will frequently accumulate multiple “doom boxes” around the house. Things might look organized, but in reality everything is a mess. It’s just a mess that’s hidden inside various containers.

So how to we deal with these boxes?

It helps to keep in mind why you have these boxes. They’re full of stuff you didn’t have time to deal with, or didn’t know how to organize. Ultimately, for any existing boxes you’re going to have to go through them, item-by-item, and figure out what to do with each thing.

But this means that if you have stuff that’s in your way, and you’re tempted to throw it all in a box to deal with later, you might want to consider pausing for a second and ask yourself a couple of questions.

First, what is it? And is it worth keeping?

It sounds a touch reductive, but what are you actually looking at? Paperwork? Office supplies? Clothes? Books? And the follow-up question is similar. If you have a pile of mail, it doesn’t take long to go through it and pull out the junk mail. Whatever you do storage-wise, the junk mail doesn’t need to be part of it!

Second, does it have an existing place where it goes?

If you have a pile of mail that’s in your way while you’re making dinner, and mail is typically processed at your desk, consider moving the pile to your desk. Stack it up and deal with it later. Yes, it’s still a pile of stuff to deal with later – but it’s a context-aware pile that actually brings you one step closer to dealing with the stuff. Just shoving it in a box is far less useful.

If you don’t have a place where mail goes to be processed, you can still move it somewhere else now – but make a note to come up with a “home” for wayward mail. Remember, it’s going to keep being a problem as long as there’s no defined place to put it!

Third, when will you deal with it?

We’ve determined that it’s something that you intend to keep. We’ve relocated some of it so that it can be dealt with more effectively. But for everything else, when are you going to deal with it?

Maybe you have to box it up quickly because company is coming and you need to get dinner on the table. Cool. Box it up. But after the company leaves, could you find a few minutes to look through the box and put the stuff away?

Maybe it’s a busy week, and you just don’t have time. Could you make 10-15 minutes on the weekend to go through the box?

There’s no shortcut here, but planning to deal with any boxes you create will help keep them from piling up.

And when you’re trying to carve out homes for your various types of stuff, it’s not uncommon to realize that the reason stuff keeps piling up is that other stuff is already piled up. If your new clothes can’t be put away because there’s no room in your closet, you’re not going to “get organized” until you deal with the root cause of the mess – the stuff in your closet.

Fortunately, that’s where a local junk removal company like us can help. If you have one or more big piles of stuff that needs to go, we’re great at making those piles disappear – in the most eco-conscious way possible. We sort, donate, recycle, and generally do everything within our power to make sure the piles in your house don’t become piles in the landfill. Just give us a call for a fast, friendly, free quote for all your junk removal needs!